As if a home invader breaking into someone’s home and stealing their televisions, laptops, Ipads and personal possessions isn’t bad enough, beating up the family dogs and frightening them as they shiver in fear, is just as criminal. 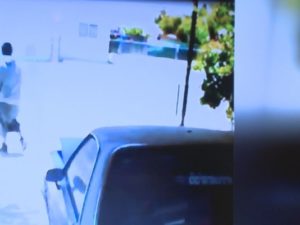 Last week, Steve Pena’s north Phoenix home located near Cactus Road and 23rd Avenue had been broken into, reports 12News. Someone had  smashed a back window with a cinder block. Shards of glass were strewn everywhere as the burglar stole a houseful of electronic devices. Little did the thief know, however that a security camera captured the culprit in action.

The video that Pena posted on his Facebook page showed a  white Nissan Pathfinder or similar SUV drive back and forth in front of Pena’s home several times. A young man, wearing a hoodie approached the front door as if checking if someone was home. And then a week later, a woman living near 23rd Avenue and Union Hills Drive linked Pena’s story to another robbery with a video showing the same Nissan vehicle. The robber had thrown a brick into a rear window of Lita’s home (she did not want her last name posted). No one at that time had called the police.

And then the worst part came. When Lita posted on Wednesday, she stated her dogs had been beaten so badly that her puppy named Alice had been hiding under the bed and was afraid to come out. It appears the dogs were beaten with a brush from the grill; charcoal residue had been left on their coats. Similarly, Steve’s four Chihuahuas and his puppies were also beaten and scared. Fortunately they were not harmed, but they were all very frightened and hiding all over the house.

Anyone with information is asked to call the Phoenix police.Help get these criminals off the streets.