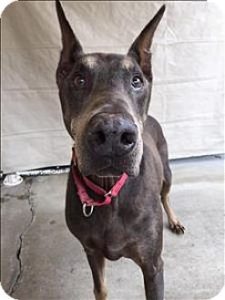 A handsome, senior dog named “Blue,” has found himself in a situation that he most assuredly never imagined…living alone in an animal shelter kennel run. The 10-year-old Doberman Pinscher was a beloved companion to a man for years – in fact, Blue’s former owner had been in possession of Blue since the time that he was just a pup.

Blue is being held at the Kitsap Humane Society in Silverdale, Washington. His Adopt-A-Pet biography reads:

This handsome senior Doberman arrived at the shelter when his owner, who lived alone and got him as a puppy, passed away and there was no one to care for him. Blue spent a lot of time outdoors in his previous home and is excited to spend his golden years as an indoor family member where he can lounge on a comfy dog bed or next to you on the sofa! He was the only pet in the home and has never spent any time around other animals or children so it is best he goes to an adopter without other cats or dogs, and children over the age of 6.

Please help Blue find his way to a new owner by taking a moment to share his adoption information. Shelter profile here.

“as published on Examiner.com“