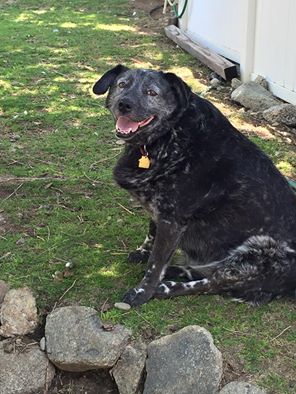 A 13-year-old dog dubbed “Ricky Bobby,” found himself unexpectedly alone after his owner died. The Australian Cattle Dog, who ballooned to a hefty 108-pounds thanks to a diet of Spam and burgers offered by kindly neighbors, was recently taken in by Marley’s Mutts Dog Rescue in Tehachapi, California, after surviving on his own for months.

On July 26, the rescue organization introduced Facebook followers to the portly senior, “‘I wanna go fast.'”Famous words from World Renowned, fictional speedster, Ricky Bobby. If the canine Ricky Bobby could speak, his catch phrase would be “more spam, please.” That sounds like joke but its not, keep reading…Like the movie character, the only way our Ricky Bobby will go fast is in a speeding vehicle.”

Weighing in at an astronomical 108 lbs, Ricky Bobby is one of the most unnaturally titanic organisms we’ve ever rescued. He is an Australian Cattle Dog and should weigh half that, if not more. I’m not judging, though, after what he’s been through, he’s lucky to be alive, much less fat.

Marley’s Mutts outlined what Ricky Bobby had been through…the senior dog had lived in a rundown house in the company of his  owner. When the man died, Ricky was left behind at the boarded up house – left to fend for himself. The senior dog survived thanks to neighbors, but their efforts left him rotund…to say the least.

The rescue group wrote, “He loves to go for walks and keeps a brisk pace at that. He is 13 years old and over 100 pounds but he’s healthy as a horse and already beginning to lose some weight!”

According to ABC News, Ricky Bobby is currently in a foster home and the rescue group hopes to find him a forever home soon.