In a disturbing story of intentional animal neglect, a cruel owner starved her German shepherd in one of the worst cases ever seen by the RSPCA inspector in ten years, reports the Grimsby Telegraph. 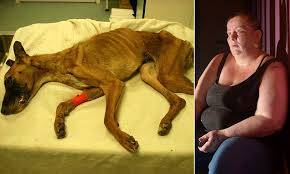 According to Inspector Stuart Wainwright, the German shepherd named Queenie, weighed only 16.5 pounds when discovered at the Grimsby, England home of Sara and Richard Loche, 37. Richard has a previous record of animal neglect and had been sentenced to a ten year ban on having any pets and a year’s community service.

“I have seen dogs in better condition that were dead,” stated  Wainwright. 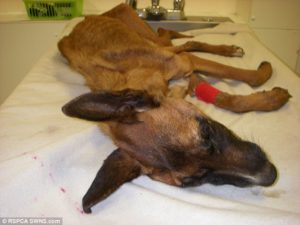 Queenie was rushed to an emergency veterinarian and was not even able to stand. The dog weighed less than half of what a German shepherd should weigh; her ribs, shoulder, spine and hip bones protruded; she had no muscle mass left. There had been no underlying medical reason why Queenie could have been in the emaciated state except that she had been starved to death.

“She had not noticed the dog was becoming below par,” Wainwright stated at the hearing.

According to the Inspector, Queenie’s owner claimed she had been feeding the dog two or three meals a day and explained to authorities the dog’s weight fluctuated. An investigation began on December 27 when a staff member at a veterinary hospital notified the RSPCA after Queenie was brought into the facility in a collapsed state. Queenie was humanely euthanized. 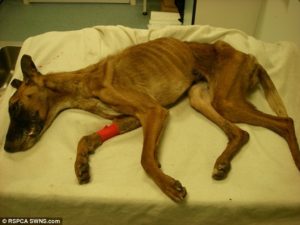 On Friday, Sara Loche was convicted at Grimsby Magistrates’ Court for animal cruelty and failing to investigate the reason for her dog’s weight loss. She did not show up for court and a warrant has been issued for her arrest.

“We will have to wait for the sentence. It was in the worst condition I have ever seen a dog alive. I have only seen them like that when dead,” stated Wainwright.

The couple allegedly have another dog in their possession which authorities state appears healthy. The dog can only be removed from the home with  a court order.
(Photos: Screenshots via RSPCA)
Follow the National Pet Rescue on Facebook.
https://petrescuereport.com/wp-content/uploads/PRR-Logo3b-300x38-1.png 0 0 Cheryl Hanna https://petrescuereport.com/wp-content/uploads/PRR-Logo3b-300x38-1.png Cheryl Hanna2016-08-28 10:52:042016-08-28 10:52:04Owner claimed ‘she didn’t notice’ shepherd starving to death
9 replies