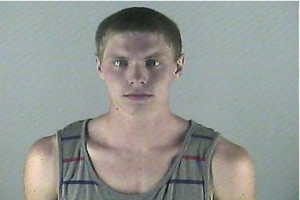 An Oregon man is accused of abusing his shepherd mix puppy, reported Sunday’s KTVZ News.  The accused abuser, identified as 20-year-old Tyler Jacob Speas of Bend, denies allegations that he kicked and punched his six-month-old pup.

The authorities were contacted twice on Friday after witnesses reached out for help after claiming to have observed Speas kicking and punching his pup, “Diesel.” On both occasions, the responding officers did not see visible signs of injury on the puppy and no immediate action was taken.

A subsequent investigation was launched and a search warrant was obtained – on Sunday, Speas was arrested in La Pine and his dog was seized and taken to a veterinarian for an examination. The veterinarian determined that the pup was suffering from multiple injuries.

Speas was taken to the county jail on charges of aggravated animal abuse and attempted animal abuse – he was later released and is due back in court in August. Speas has adamantly denied the accusations against him, telling KTVZ News that he had reprimanded the pup for peeing in his car – he has stated that he loves his dog and would never hurt him.