You are here: Home1 / News2 / Dogs3 / dog news4 / One dog left behind after adoption event finds home and is returned
Spread the love
Tweet 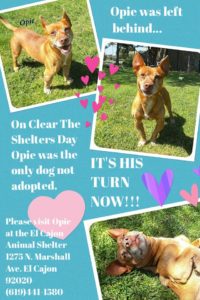 The one day, nationwide “Clear the Shelters” adoption event was a huge success. The adoption event resulted in new homes for countless animals, but one dog, at one California animal shelter, found himself homeless at day’s end. According to Thursday’s NBC San Diego, “Opie,” an eight-year-old Chihuahua mix, was the only dog left at the El Cajon Animal Shelter when the adoption even wrapped up.

Things looked brighter for the one remaining homeless dog just a few days later – a man from Poway arrived to the animal shelter and adopted little Opie on Wednesday afternoon. Unfortunately, Opie’s happily-ever-after “tail” was short lived. The newly adopted dog was returned to the shelter on the very same day – according to staff, the man who had adopted Opie did not provide a reason for the failed adoption.

Now, Opie is waiting, once again, for someone to take a chance on him. Opie has some restrictions which make his adoption more difficult – according to the El Cajon Animal Shelter, Opie should be the only dog in the house. On July 26, the shelter made a Facebook post on Opie’s behalf:

After Clear the Shelters, all of our animals were adopted except for OPIE! This cute little man is an eight-year-old Dachshund/ Chihuahua and would love to spend his golden years as the only dog in a house with a loving person or family!