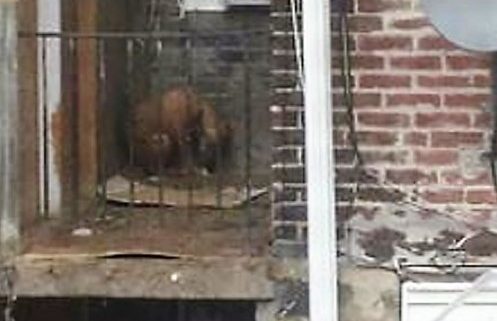 On Friday, the Pet Rescue Report received an official response about the ‘sad’ dog on the balcony of an apartment in Philadelphia, Pennsylvania. A great deal of outrage was sparked about the concerning situation after a Facebook user by the name of Lorena posted photos of the dog to social media and stated that the local animal control agency was “aware” of the dog on the balcony, but nothing had been done to remove the dog from the situation.

According to Gillian Kocher, Director of Public Relations and Marketing for the Pennsylvania SPCA, the situation is not all that it seems. In an emailed statement, Kocher advised the Pet Rescue Report that, “The PSPCA has been contacted about this case, and we have had an officer out to the scene more than ten times since this was first reported to us in August. Of those times, the dog was actually outside on the porch less than a handful of times. The dog does not live outside.”

Additionally, when this post went viral on Wednesday, the owner was not the one at the residence who put the dog outside. The situation was corrected within an hour of the initial report when our PSPCA Humane Law Enforcement Officer went out. We have checked twice since then both yesterday and today and dog is still not outside.

According to Kocher, the woman who posted the images to Facebook has overstated the frequency that the dog is actually outside on the balcony. The dog in the photos is not being removed from his (or her) owners.

We understand the frustration of some of the public, but things are being drawn from a photo or a few photos that are incorrect. The dog is in good condition and does not live outside. There are no violations of the cruelty code, and therefore no reason to take the dog out of its current situation.