You are here: Home1 / News2 / Dogs3 / dog abuse4 / ‘Against all odds’ puppies in fight for their lives with help...
Spread the love
Tweet

Five puppies in Alabama are fighting for their lives. Just one week ago, the person “dumping” the dogs identified them as a mixture of Shih Tzus and Chihuahuas, yet told the shelter they were “strays.” 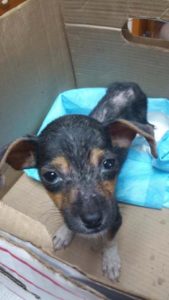 Weighing little more than one pound each, no one wanted to adopt the pups because they weren’t “perfect” as they suffered from sarcoptic mange .

And so the shelter reached out to Rescue Dogs Rock NYC, and co-founder Jackie O’Sullivan quickly agreed to help. Unfortunately the situation turned serious in a very short time. A Facebook post updating the organization’s followers stated:

“Come to find out the shelter refused to vaccinate them saying they were too young (under 6 weeks), however they have their puppy choppers which proves they are at least 8 weeks old. So, we unknowingly took these precious babies with no vaccines & now they are all at a vet because at least one has broken out with dreaded parvo!! We are so sick & upset! They should have been vaccinated when they came in! It may not have prevented this, but at least they would have had some defense,” stated Jackie. 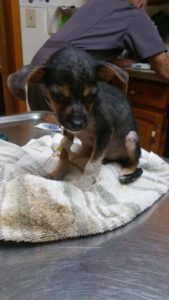 Now dubbed the “against all odds” puppies, the little ones are in serious condition, however the organization’s participating veterinarians  are doing everything possible to save them. One tiny pup, named Paulie is the weakest of the entire litter. His gums are pale, he’s lethargic, completely dehydrated hairless and in pain. Please share the plight of these seriously ill puppies and help by donating to their care. 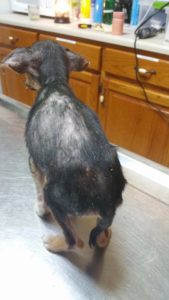 His video is available for viewing here:

Do you know me? Elderly, 14-year-old dog at animal control Dog decapitated during home invasion
Scroll to top