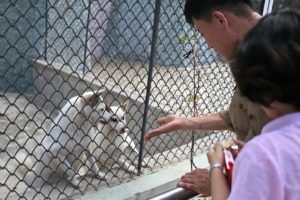 Famine in the Democratic Republic of Korea, caused by poor economic dealings, floods and droughts have accounted for the deaths of more than 300,000 people in the 90s. North Korea continues to suffer from widespread famine, however it doesn’t appear the overweight dictator ever misses a meal. And since there is relatively no control over dogs, the heavily monitored press has been extolling the virtues of cooking dogs – referred to as “dangogi” or sweet meat in Korean. In addition, Jong Un claims dog meat is more nutritious than chicken, beef, pork and duck.  Not only does the maniacal dictator encourage residents to eat dogs, his delusional rantings encourages people to beat, whip and set the dogs on fire while alive to make their meat tastier. More propaganda media continues to advocate eating dog meat labeling it as the “finest medicine” one can find. In a country where people are starving and the rice rations get sparser, the population quickly buys into the desperate plight of torturing and eating stolen, stray and suffering dogs.

Yet now a pets’ pavilion in the capital’s zoo appears, displaying St. Bernard dogs, Schnauzers, German shepherds and Shih Tzus; all waiting to be viewed by tourists much the same as the elephants and penguins. A cage showing off the King Charles spaniel which once belonged to Kim Jong-Un’s father has become a popular “exhibit.”

Not withstanding the perfectly groomed French Poodles and tiny Chihuahuas, all the dogs have something to do with gifts bestowed upon the dictator’s family somewhere along the way. And instead of displaying recipes for dog meat that have been posted throughout the country, the zoo only supplies information on training, kindness and patience when bringing a dog into the family. The zoo is stated to have more than 5,000 animals spanning more than 650 species; dogs being one of the most popular attractions.

Man claims Chihuahua ran into window and broke it before falling out of second... Sweetheart of a shelter stray with chemical burns worthy of better life
Scroll to top