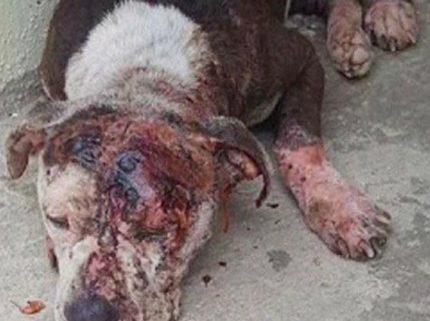 The New York Bully Crew reached out to save a terribly injured burned, broken and defeated dog in Puerto Rico after a video posted on social media caught the eye of the rescue group’s local contact. In an instant, volunteers set out to find the dog labeled on Facebook as Chantal. Her photos and short video could make even the most stoic cry.

When found, Chantal had been hiding under a house; she was scared, starving and alone. The defeated dog’s entire body seemed to have endured serious burns, and it is assumed she had been hit by a car; her fractured pelvis and hip damage contributed to her agony. Rushed to an emergency veterinarian, it was confirmed she had been burned – possibly by acid. Chantal is slowly being nursed back to health.

For weeks, Chantal’s chances of surviving her horrific ordeal were touch and go. And now she is stable enough to have had her her disposition evaluated. Despite her horrific experiences and memories however, volunteers state she is great with other dogs and loves to be with children. Chantal faces a long and complicated rehabilitation. When she is strong enough to travel, Chantal will be transported to the United States where her new life will really begin.