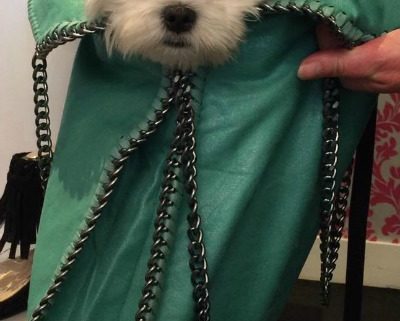 In a disturbing tragedy in Great Coates, located in  North East Lincolnshire, England, a couple mourns the death of their nine-month-old Maltese, mauled to death after he was dragged from the garden of his home by the neighbor’s large dogs, reports The Sun.

Jim and Linda Masterton’s puppy named Andy Murray was dragged to his death by an Akita and a bulldog  on Monday morning:

“All I heard was the dog squealing and being dragged through the hedge,” stated Jim. “Murray was gorgeous. He can never be replaced. He had a lovely life. He was our little dog, and it was only nine-months-old today.”

This isn’t the first time, however  the Mastertons say they have complained about the dogs barking too often, stating the dogs are kept in a “caged compound.” And now the other neighbors are reinforcing their fences to ensure the two dogs can’t enter their property. It seems the dogs made their way through a hole in the rear fence.

Authorities have been made aware of the tragedy, and “appropriate advice was offered to the caller and the matter is now being assessed by the force’s dog officer.” There, however is not much that can be done other than the local dog warden can order the dogs be neutered (if not already done) or order proper fencing.

The Mastertons intend to take legal civil action against their neighbors and hope to advocate for harsher punishments.

(Photo via screenshot SWNS from The Sun)