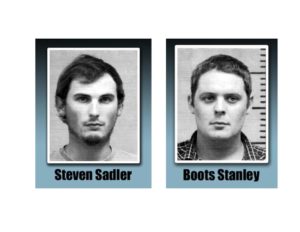 The two most hated men in America, Boots Stanley and Steven Sadler

Bastrop, Louisiana located in Morehouse Parish boasts scenic drives and breathtaking views via its Chamber of Commerce.  Their motto is “The city of spirit, pride and progress.”

But something dark and sinister lurks among the scenic bayous and beautiful scenery; it’s known as the Bastrop Louisiana Kill Pen where hundreds of horses are taken before being transported to slaughterhouses in Mexico.  The pen has been owned and operated by Greg, Mitchell and Hal Stanley.

There have been strong allegations of abuse committed against the animals in the Stanleys’ care.  Abuse that includes horses being beaten, doused with gasoline and having their throats slit. The Stanley family claims they save horses and care about them. If that’s the case why do they charge horse rescuers 5% more to take the horses from their pen than the other three leading Kill Pens in the U.S.?  They get the horses from the auctions at a cheap cost then charge over inflated prices to rescuers and individuals who want save the poor beasts from slaughter.

Along with the allegations of torture and abuse occurring to horses at the kill pen, one of the most heinous crimes ever committed against an animal occurred on their property on or around August 24th, 2016.   On that day, Boots Stanley, son of Greg Stanley along with his friend Steve Sadler took a Pit Bull dog, tied it by its neck to the saddle horn then rode around with the dog clinging for its life to the horse. After they terrorized the dog and the horse for a while, they finished off their gruesome act by taking a knife and sawing the dog’s throat until it was dead. The entire act was recorded by Stanley on his cell phone and posted on Snapchat.

According to KTHV News Boots Stanley is heard on the video saying “Michael Vick has nothing on me” as the dog was dying.

The video went viral and the two men were arrested on August 25th 2016 after turning themselves in to the Bastrop Police Department.

Their first court hearing was on September 20th 2016 where they both pleaded not guilty to one count of animal abuse and one count of conspiracy.   Per KTHV News,  Boots Stanley and his family left the courthouse via the backdoor that day.

There is even a more macabre side to all of this.  In an article posted in “The Monsters Among Us” on August 26th, 2016, a former girlfriend of Boots Stanley told an anonymous source that he often engaged in bestiality with the horses at his father’s kill pen.

An administer for the Facebook page “Justice for Justice” interviewed many locals who had known the Stanley family for many years  – the source states that the locals all corroborated a story of Boots Stanley severely beating an LSU student with a hammer. Boots was arrested but got off without being charged due to his father Greg Stanley allegedly paying off the the victim’s family. These same sources state that Boots Stanley was expelled from the local high school due to his violent behavior.

After Stanley and Sadler bonded out of jail two other photos of Boots Stanley surfaced showing him holding a large stick sitting atop what appears to be a dead horse. The second photo shows Boots holding up a blood spattered hand with blood on his shirt and smiling for the camera. This was reported in the online publication “News of the Horse” on October 5th, 2016.

But the violence is not limited to the younger generation. According to the News Star, on September 22nd, 2016 Greg Stanley, Boots’s father and his cousin Michael Stanley were recently charged with battering Andrew Payne, a 65 year old local citizen. Payne drove by the kill pens concerned for the horses and the Pit Bull that was killed there. Greg and Michael allegedly hit Payne with a board and with their fists through the window of his vehicle. Greg Stanley also recorded the beating on his cell phone. He faces Aggravated Battery charges and has his first court hearing on October 31st, 2016.

The Stanley family needs to be fully investigated and stopped and Boots Stanley and Steve Sadler need to be charged with a Class D Felony/Aggravated Cruelty to Animals charge and punished to the fullest extent of the law.

Please help make this happen by contacting the Acting D.A. on the case:

There are also two active petitions on line:

“Your intuition suggests something isn’t right but you’re not sure what it is. It is not until the aftermath that you can see clearly and realize that true life can be more terrifying than a horror movie, that monsters are real and evil preys on the innocent.” ~unknown