You are here: Home1 / News2 / Dogs3 / Milo, betrayed by family and neglected by shelter vets 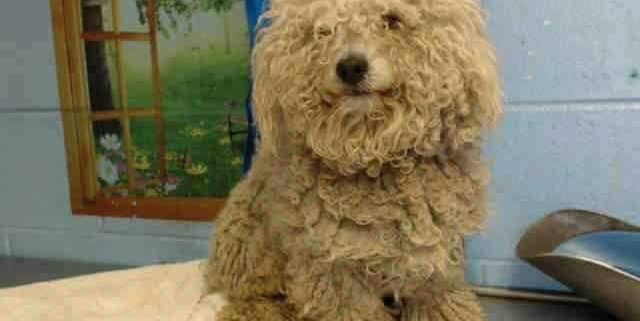 A two-year-old small dog was recently relinquished to the San Bernardino County Shelter in California as a stray by someone who was obviously his owner. His fur was badly matted, yet he went along willingly and obediently trusting everyone to do right by him. Unfortunately, that wasn’t the case. Milo was betrayed by his family and may have been neglected by shelter vets.

Because he was brought in as a stray, Milo was placed under a stray hold until November 2nd in the event an owner other than the person who dropped him off showed up to re-claim him.

After only one day off stray hold, the shelter issued an ultimatum; have a rescue pick him up or the dog would be euthanized.   Their excuse for shortening his “adopt-ability” time – because he had a medical issue involving his genitals.  San Bernardino County apparently sent him to the emergency vet and their idea of “treating him” was to staple his genitals and put in a single stitch.  After this “treatment” he was sent back to the shelter. A few days later, the shelter sent Milo to another vet’s office; Advanced Pet Care of San Bernardino where the staff reportedly did not take the time to clean him up or remove the metal staple left dangling from his penis. They gave the verdict; find a rescue or he would be put to sleep.

Upon hearing Milo’s story, Phyllis Smith-Vanboxtel Osh from Recycled Love Dog Rescue immediately went to pick him up. She was horrified to see the condition he was in after visiting two separate vets during his stay at San Bernardino County. He smelled badly, and the vet never even shaved the area where they performed the crude surgical procedure.

Phyllis took Milo to her own vet who shaved his matted fur and removed the staple. Through it all Milo was a sweet, good boy who was content to finally have gentle, caring hands touching him. Although Milo’s story had a happy rescue ending, he was let down by so many people in his two years of life. First and foremost, his “family” who neglected him, dumped him at the San Bernardino County Shelter repaying his years of loyalty to them by declaring him a stray. Then came the disappointment of the San Bernardino County Shelter and the two veterinarians whose job it is to care for the animals.  They were in a hurry to put him to sleep without even removing the surgical staple from his body.

Milo will need another corrective surgery and Recycled Love Dog Rescue will need donations to help defray the cost. In addition to rescuing Milo, they have also recently taken in two litters of puppies, three dogs needing medical treatments and a senior dog. They are a 501(c) (3) rescue so all donations are tax deductible.  Donations can be sent via Paypal to RecycledLovedogrescue@live.com.