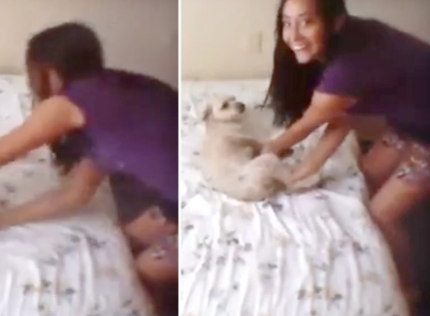 A teenage girl, reportedly from Mexico City, Mexico, is the “star” of a disturbing video which is circulating on social media. According to Wednesday’s publication of the Mirror U.K., the name on the Facebook page associated with the girl is Esmeralda Gongora.

The video starts off with the young girl blowing a kiss to the camera – she then proceeds to repeatedly pick up a small white puppy to throw in the air. Each time, the frightened pup crawls back to the young girl, only to be picked up and thrown again.

The disturbing video has been viewed over 620,000 times on Facebook and it is drawing the ire of people from around the world. The girl in the video is repeatedly referred to as evil and sick and a great deal of sympathy and concern is expressed for the pup who is on the receiving end of the teen’s foul behavior.

A petition calling for the teen to be prosecuted currently has nearly 60,000 signatures (click here to read more). There are unconfirmed reports that the dog has been rescued.