In Victoria, Canada, a hostile kitty named ‘Baby’ attacked seven pit bulls out for their daily walk without any provocation, reports the Sun. 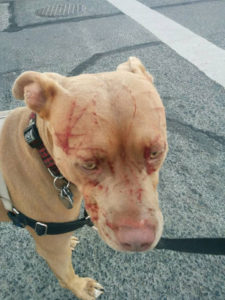 Dog walker Kyla Grover had been walking the peaceful pack of pooches when suddenly Baby started flagging her sharp claws at the dogs.

“The dogs were walking by completely minding their own business,” explained Kyla. “The cat just goes at all of the dogs, not backing down. The cat is swiping at them and latched onto one of the dog’s faces. I got bit and scratched in the process of trying to separate them.”

None of the dogs tried to fight back, but were reported to have barked aloud in pain after the merciless attack by the mean feline with the ferocious temper. Kyla spent the night in the emergency room being treated for cat bites. One dog named Bandida had to spend time at the veterinarian office having the deep cuts to his face treated.

As to Baby, the cat’s owner, Del Thompson had no idea why his 16-year-old senior cat attacked the dogs except to say that sometimes cats and dogs don’t get along. Normally the moody kitty would have been scared of the dogs Thompson explained, but the owners did agree to pay the vet bill for Bandida. Thompson’s wife, Betty Jean, 78, claims this entire event has been exaggerated and that her cream colored kitty was just being protective of her when the dogs walked by. 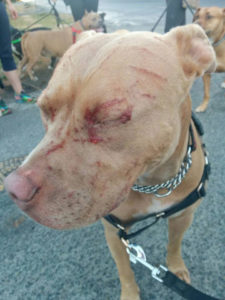 “There is no ambush about it. Somebody is blowing this all up,” claimed Betty Jean.

Javiera Rodriguez, Bandida’s owner, wanted to use this as an example of how pit bulls are just like any other dogs; stressing they are great family pets and that none of the dogs even tried to fight back while being attacked by Baby.