You are here: Home1 / News2 / Dogs3 / dog rescue4 / Man rescues woman and her dog from drowning in Louisiana floodwaters
Spread the love
Tweet

On Saturday, a very lucky woman and her dog were rescued from the Baton Rouge floodwaters by a good Samaritan who managed to save them in the nick of time as their vehicle submerged, reports the WlsTvNews. 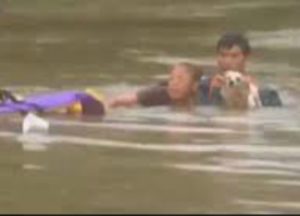 In a viral video, shot by television station Wafb, three men including David Phung are in a boat in the brown murky water. Moments later Phung jumps from the boat into the quick-moving currents and with a knife tore open the convertible top of the woman’s vehicle. The frightened woman could be heard yelling,

Phung and another man in the boat screamed back at her that they were coming to her rescue. As Phung tried desperately to break a window of the car, instead he jumped into the water and ripped at the canvas top of the car. The woman then went under the water as Phung dove under to pull her up.

“Get my dog,” the woman begged and as Phung kept the woman afloat, he had to repeatedly dive to find the small white pup telling the woman he did find her dog.

According to Governor John Bel Edwards, it is expected the flood waters will subside on Sunday. More than 2,000 people have had to be rescued across the state. Residents are warned not to venture outdoors as it may take several days for all the water to recede.

Sadly three people have died from the devastating floods.

Video: Dog whimpers in relief as rescuers come to her aid in old well Teen pet-sitter accused of beating puppy to death
Scroll to top