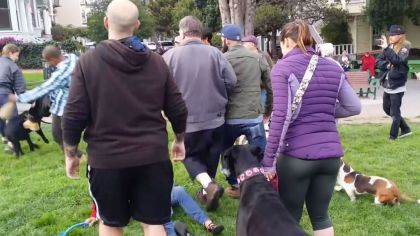 In San Francisco, a violent encounter at the popular Duboce Park on Thursday began with playful dogs and ended in a disturbing display of human anger after one pet owner became violent, reports CbsLocalNews.

Caught on cellphone video, a dog owner is caught and tackled as he kicks a black Labrador retriever. A witness, Brook Stevenson recounts the series of disturbing events:

“The basset hound was making all this noise. He went between this other owner’s legs, and the owner of the basset hound came out of nowhere and pushed this guy.”

Apparently the basset hound became scared and started to yelp. With that the dog’s owner overreacted and grabbed the woman’s dog. The man the dog owner pushed had nothing to do with the dogs. Someone in the crowd pulled the man off, and the cell phone video started recording. One of the bystanders is seen grabbing the basset hound owner by the arms so the owner of the Labrador and her dog could get away. The basset hound owner yells:

And as the woman takes her dog to exit the park, the man skirts around the other onlookers and kicks the Labrador in the side. The crowd gets angry, and a bystander tackles the basset hound’s owner. The man then picks up his dog and leaves the park as onlookers call authorities.

Police are now investigating the incident. The man was last seen  wearing a checkered long-sleeve button-down shirt, dark pants and wore a tan baseball cap and tan hiking boots. Check out the video: