In  a disturbing act of animal cruelty, an east Detroit man was caught on a home surveillance video encouraging his two dogs to attack a defenseless kitten, reports Abc7News. 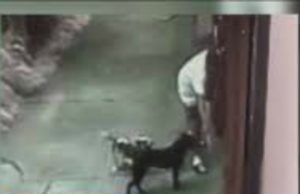 Tragically the kitten was found mauled to death on July 24 on Collingham, and the man responsible for the heinous act can actually be seen poking the tiny kitten with a stick while egging his dogs on. One of the dogs is then seen grabbing the kitten and running away. Later that day, the mother cat is seen wandering the area calling for her kitten.

Greg Kelly, a member of the Detroit 300 group and the Detroit Dog Rescue want to find this man so he can be punished to the fullest extent of the law.

“I feel like it was a real cruel thing to do. People out here are doing some real nasty things to animals,” stated Kelly.

A $1,500 reward has been offered by the Detroit Dog Rescue to identify the person responsible leading to the man’s arrest and conviction. One can only shiver in fear to think what someone like this could do to a child, an older person or a woman not able to defend themselves. It is believed this man lives in the neighborhood.

16-year-old German shepherd surrendered back to shelter just when she needed... Woman pleads guilty to charge of having sex with dog
Scroll to top