An Oklahoma man, with a criminal history, was jailed for using a power washer on his two dogs. The man accused of animal cruelty is identified as Patrick Schultz of Comanche, reported Thursday’s KFOR News. The local authorities were alerted to the cruel situation by a good Samaritan who witnessed the cruel deed at a local car wash and phoned 9-1-1. 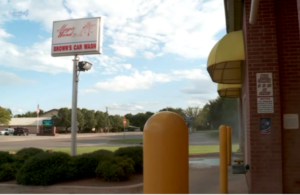 When officers arrived to the Magic Wand Brown’s do-it-yourself car wash, they attempted to get Schultz to stop using the high-powered nozzles on his two dogs, but he refused. His refusal led to an arrest.

Schultz claimed that his dogs, a mixed breed puppy and a Chihuahua, were dirty and that they needed a bath – he stated that he was “from California and didn’t know any better,” but there are signs posted at the business letting people know that the high velocity power washers are for vehicles only. 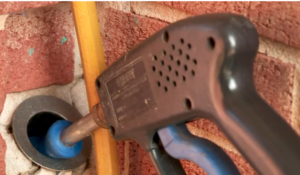 Schultz was taken to jail but he has already bonded out – he has a history of criminal misdeeds, including aggravated assault and battery and attempted burglary.

Despite the dangerous situation, the dogs who were sprayed down with the powerful nozzle are expected to be okay.