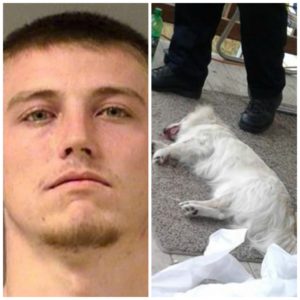 A Billings, Montana, man who admitted to killing another family’s dog with a cane, will spend just four days in jail for his crime, reported Monday’s KVTQ News. The dog killer, identified as 21-year-old  Anthony “A.J.” James Allen, killed a small, white mixed breed dog, “Joker” in an apparent fit of anger.

Witnesses told the authorities that Allen “was yelling and cussing and had killed the dog.” Allen kicked Joker and struck him multiple times with a cane – the dog died on Sunday at Allen’s mother’s house.

Allen was arrested and taken to Yellowstone County Jail – he was charged with a misdemeanor cruelty to animals charge and sentenced to just four days in jail and anger management class. In addition to the short jail time, Allen was instructed to stay away from animals.

Individuals who have learned about Allen’s crime have expressed dismay and outrage that he faced only a misdemeanor charge and short jail time for killing a dog in such a brutal fashion.