You are here: Home1 / News2 / animal cruelty3 / Lion tries to snatch baby out of mother’s arms on live televisio...
Spread the love
Tweet

As if there can possibly be any excuse for placing a wild animal and a baby in such close proximity is beyond reasonable comprehension, but the distressing situation happened on live television and has resurfaced all over social media this week. 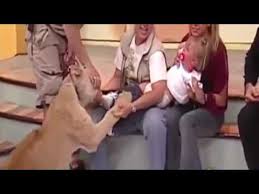 The segment was recorded on Mexican Con Sello de Mujer, according to the Complex, and was filmed in 2006. A young lion lies at the feet of two trainers during a discussion of wild life, when a baby in her mother’s arms begins to fuss. The cat then quickly gets up and lunges at the baby’s leg trying to pull her toward him with his paw and his mouth. Amazingly, the baby’s mother remains extremely calm; the trainers work to separate the two, while the baby screams and the lion continues to draw her closer. 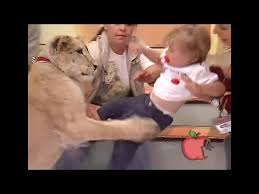 One of the trainers carefully pries the lion’s jaws even as open as the cat pulls at the baby’s pants.

And then the trainer tries to explain that the lion thought the baby was a toy. Just moments after the attack, the lion is  taken off the stage. The entire segment was poorly planned, and in fact presented a life threatening situation for the baby, the guests, the trainers, and the lion. Had a tragedy occurred, one can bet the lion would have been blamed and immediately euthanized.

Wild animals are not entertainment. Watch the frightening segment here: