Thousands of people, from across the nation, have been hoping against hope that an 18-year-old owner surrendered dog named “Muneca” would be rescued from a busy California animal control facility. On Wednesday, the elderly dog was rescued and she is already receiving veterinary care thanks to the help of a San Diego area non-profit rescue group.

Two days ago 18 year old Muneca was surrendered to Baldwin Park Shelter covered in fleas. Elaine Seamans of the At-Choo Foundation and the talented John Hwang teamed up to get her story heard, and today she is on her freedom ride down to sunny San Diego as our newest Frosted Face!

Urgency and passion stir the animal rescue community, so when an 18 year old purebred dachshund enters the shelter system there is no shortage of foster and adoption offers.

Muneca, who was photographed at the Baldwin Park Shelter by John Hwang, took her freedom ride from the facility on Wednesday morning with rescue agency volunteers and she is now at the San Diego Bay Animal Hospital undergoing lab work, x-rays and getting fluids – according to her rescuers she is “very lethargic.” 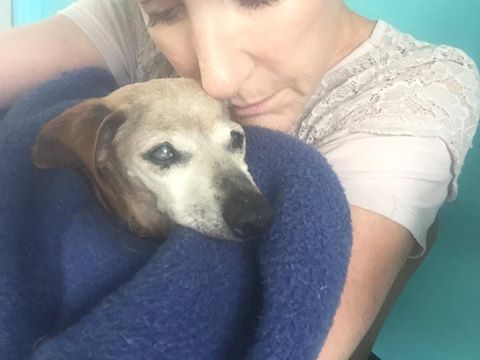 To donate toward the care of Muneca:
• Call San Diego Bay Animal Hospital at (619) 481-3007 and donate to Frosted Faces Foundation’s account