You are here: Home1 / News2 / Dogs3 / dog abuse4 / Las Vegas dogs removed from home after one found with tape on muzzle
Spread the love
Tweet 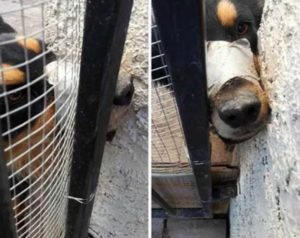 Police arrived at a home located at Alexander Road and Torrey Pines Drive and found tape on one of the dog’s mouth – determining an animal cruelty case was now under investigation. The dog had worked free of the tape, and was  safe, however on Saturday morning, two dogs were removed from the property. Neighbors were shocked stating the dog named Taz was a great dog and hardly ever barked.

Next door neighbor, Jamie McQuade knows Taz  as well as the dog’s owner.

“He’s a really good dog. He doesn’t bark much and when I saw his mouth taped shut, I was really confused, really sad and upset for him,” stated Jamie.

According to CopBlock.org, a neighbor originally posted the disturbing photo on Facebook. Subsequent reports indicate when Animal Control had been called, the reporting witness was told if the dog could drink water, it was not considered animal cruelty. In the initial photos, comments from the witness also stated the dog was never allowed inside of the home; temperatures in Las Vegas have recently soared to over 115 degrees. Taz’s owner has allegedly been identified as a police officer for the Las Vegas Metropolitan Police. There have been no charges filed as of the time of this report.

Neighbors agree there is no excuse for any acts of animal cruelty and state the community has always been very pet friendly; all agree however if there is cruelty going on in a home, remove the pets and find them new homes where their lives are cherished and respected.