In Lancaster, California, the prison has welcomed in nearly 50 dogs from the Deaf Dog Rescue as 37,000 acres Sand Fire continues to burn in the  Santa Clarita Valley Mountains, reports Fox News.

The dogs were evacuated on Sunday after shelter’s directors Lisa Tipton and  Mark Tipton  saw the flames from the Sand Fire blowing in their direction.

“We’re pretty high up on a hill and we didn’t want to take a chance on floating embers ’cause all it takes is one to light this whole place up,” Lisa Tipton told ABC News. She said she called dozens of local centers, shelters and other rescues, but only the California State Prison in Los Angeles County offered to take all the dogs, no questions asked.

On the organization’s Facebook page, Lisa admitted the decision to move the dogs didn’t come lightly. 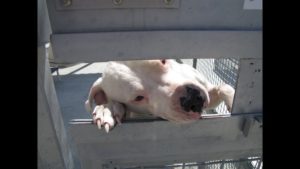 “We knew if we had an issue in the middle of the night, Mark and I would be here alone with 45 dogs to load up. Not a can-do. It wasn’t mandatory, nor did we have impending flames licking at our heels. We decided to be better safe than sorry because we love our dogs here. They come first, always. We struggled to find a place that would be able to accept all of the dogs, splitting them up wasn’t wise.”

And now the inmates have become the guardians of this very special pack. The two-year-old program, dubbed “Paws 4Life” matches prisoners with dogs for mutual benefit. Each dog has several guardians who help them achieve a new “leash on life.” The public information officer for the California Department of Corrections and Rehabilitation stated most of the dogs entering into this program would likely have been euthanized, but now given another chance, many lives have been saved. Typically the inmates work with professional trainers to socialize them, teach them basic obedience and then assess their overall behavior and knowledge helping the dogs pass the American Kennel Club’s Canine Good Citizen test. The dogs are taught basic commands and social behaviors.

At this time more than 75 dogs in the prison program have been successfully adopted. And if you are curious as to how the 50 deaf dogs have adjusted to their new environment? According to Lisa, every dog had a smile on his face when she checked. And just as rewarded are the prisoners who thank the dogs for giving them a purpose in life and finding someone to love.

Check out the video – it will make you smile.

Afraid and alone, 3 dogs left behind at shelter as their family moves away Two dogs dead – believed to have been thrown over cliff
Scroll to top