In Oakland Park, Florida, one frightened little kitten used up one of his nine-lives on Thursday – but with the help of the kind and compassionate Broward Sheriff Fire Rescue team, the curious little feline is expected to make a full recovery. 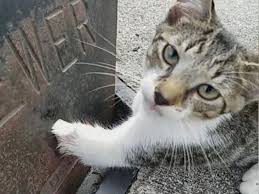 According to News7Miami, the Broward Sheriff Fire Rescue had received numerous reports of a cat with its paw stuck in a sewer cover along the 3500 block of Northwest 39th Street. The poor kitten was in terrible shape as the men tried for a half-hour to free his paw with no success. So what to do? The team rushed the kitten to Imperial Point Animal Hospital in Oakland Park – yes, that’s right – with the man hole cover still attached. Once at the vet, the kitten was sedated and firemen carefully cut the cover away with a hacksaw and a circular saw. 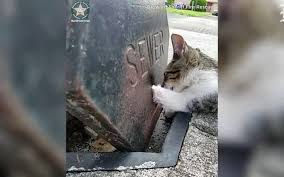 No one knows how long the kitten had been stuck in the cover, but his entire paw and shoulder had been swollen. Fortunately he came out of his painful situation with only a wound to his paw. 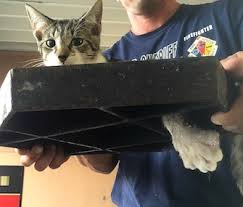 Dubbed Captain, the little guy will be vaccinated and microchipped and be ready for a new home soon. On the Facebook page of the Broward Sheriff’s Office, the rescue drew hundreds of kind comments prompting the heartwarming reply:

“… The vet reported that the kitten avoided broken bones or any major injury. What a purrfect ending!”

You need to watch this #BSO kitten rescue right meow. The kitten had its left front paw stuck in a one-inch opening in the steel sewer cover. BSO Lauderdale Lakes firefighters spent a half hour on scene, unsuccessfully attempting to free the feline’s trapped limb. They took the kitten, sewer cover and all, to VCA Imperial Point Animal Hospital in Ft. Lauderdale, where Dr. Lara Wiseman worked with firefighters to free the paw. The vet reported that the kitten avoided broken bones or any major injury. What a purrfect ending!