Deep in the Pinelands of New Jersey, a four-year-old cat is still missing and military officials are using a K-9 tracking team to help in the search, reports NJ.com. 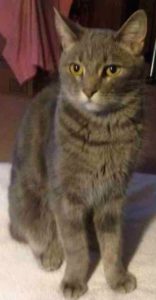 In this very special situation, an 87-year-old woman was discovered last week in the backseat of her car deep in the forest, by soldiers from the Massachusetts Army National Guard who had been training at Joint Base Mcguire Dix-Lakehurst. It seems the woman, Jeannette Haskins of Little Egg Harbor had been on her way to visit family in Maryland when she became disoriented and ended up lost for three days. Fortunately, the elderly woman was able to collect rain water to drink during the 90 degree  heat wave. When found, Haskins was severely dehydrated, but she has since been reported to be doing better.

Of utmost importance to Jeannette is her lost gray and white tabby, Mokey, who had been traveling with her, and of course is her best friend. A volunteer pet detective, Bonnie Wagner-Westbrook is working with military officials and a K-9 tracking team to help find Mokey who was adopted two years ago from a shelter in South Jersey.

According to the Press of Atlantic City, it is now at a critical point as to how long the cat’s scent will be around and be useful in Mokey’s search.

“This is the perfect storm of a place to lose an animal; on a military base with no access, a desert/Pine Barrens environment, excessive heat. There is, fortunately, a stream nearby where the car was found,” stated Wagner-Westbrook.

Mokey is micro-chipped and  does have some street experience, so it is hoped he is found safe and able to rejoin Jeannette. The family is offering a reward. Anyone with information is asked to call 443.631.7157.