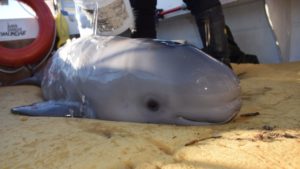 In the true definition of rescuing, teens helped to save an orphaned baby beluga whale along the beach of the St. Lawrence River in Canada.

According to CBCNews,  Nicholas Milliard, 15, and his younger brother first spotted the calf, who had lost her mother on the Rivière-du-Loup, Quebec Thursday afternoon. The tide was low, and the whale was almost completely out of the water. The boys called over their family, and everyone used pails of water to keep her wet and covered her with a sheet to protect the baby from the afternoon sun.

“We dug a hole so that water would accumulate and its skin would hydrate,” Nicholas Milliard. “Every five minutes we got it a bucket of water. The water level was dropping, and it was becoming more and more difficult to get water.” 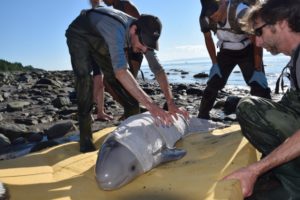 When the Group for Research and Education for Marine Animals arrived, they used Facetime to contact a Vancouver based veterinarian, who determined the whale was a female and only hours old as its umbilical cord was still attached. 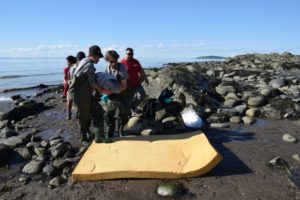 When the baby was considered healthy, the staff introduced her to a group of females accompanied by other young whales. Although the baby seemed to get along with the pod, none of the females showed any signs of wanting to feed her. What happened to the mother remains a mystery. Baby belugas nurse from their mothers for approximately two years.

The baby then migrated to a second group made up of younger whales, however her fate remains unknown.

Chemical pollution may be the cause of a serious decline in the beluga whale population which surpassed 100,000 a century ago; today the count is less than 900. This year alone, four dead belugas, including two nursing females have been recovered.

Milliard and his brothers are hopeful this baby will survive. 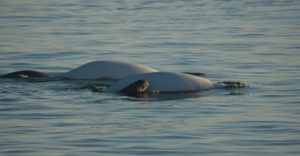 “We are proud,” he said. “We told ourselves we just saved a life, and a rare one at that.”

Awesome job young men; you are heroes. Read more about the plight of the St. Lawrence belugas here.

(Photos from Group for Research and Education on Marine Animals) Follow the National Pet Rescue on Facebook.