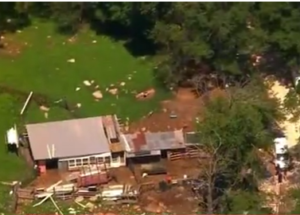 Hundreds of animals, living in squalor, were discovered on sprawling property in Westport, Massachusetts, this week. According to Wednesday’s WISH TV News, the number of animals on the property located off Route 177, could number between 600 and 800.

The disturbing find has led to an animal cruelty investigation – and apparently it is not the first time that this same property has been found with animal cruelty related problems. According to South Coast Today, six years ago, a search warrant on the same property revealed sick and dead animals, along with illegal dumping and abandoned cars.

The current situation is even more dire – according to WPRI News, over five dozen animals, in pitiful condition, have already been put down since the investigation started on Tuesday. Many of the surviving animals have been taken to the Animal Rescue League of Boston for care.

The deplorable situation is located not far from a residential area – Westport Police Detective Jeff Majewski described the property as looking like a “Third World country.” He stated, “It sickens me that people from outside Westport bring in abused animals, burn their household trash and care not for the environment. This is an unmonitored business in the ‘game of animals.’ ”

The massive rescue effort has overwhelmed local resources. Read more about the prior situation found on this same property at this link to WISH TV.