In Libby, Montana, more than 120 animals including dogs, donkeys and birds were removed from a suspected puppy mill operation announced the Humane Society of the United States on Tuesday in a press release. 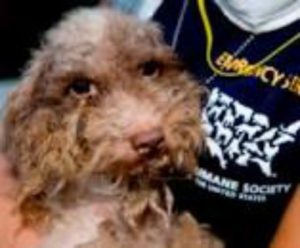 After a tip from a concerned citizen, the Lincoln County Sheriff’s Office and Lincoln County Animal Care and Control, with assistance from The Humane Society of the United States arrived at the property located at Crossway Avenue where the owner had been selling puppies through a personal website and Facebook.

According to the Western News, no charges have been filed against the property and owner at this time. Removed from the property were 49 poodles, three other dogs of various breeds, six donkeys, 60 parakeets and three canaries.  Some of the dogs were underweight, severely matted and suffering from untreated eye, ear and dental infections. The dogs ranged in age from several months to adults. Wendy Hergenraeder, Montana state director for The HSUS, stated:

“Sadly, the conditions we witnessed today are typical for commercial dog breeding facilities in Montana, since the state does not have any laws to regulate puppy mills. We’re thankful to the Lincoln County authorities for making sure these dogs and puppies will never go hungry again.”

The agencies identified the animal owner as Cathie Warren, the owner of Adonai Rare Poodles; the woman had been selling puppies through Facebook  and on her website. Warren denies she has been operating a puppy mill and contends she has been a licensed dog owner in Lincoln County for three years where she has passed previous inspections.

In addition, of the 53 dogs seized, Warren claims only six of the dogs were in need of haircuts; a task she had planned on doing in the coming weeks. As for the six donkeys that were seized because they were thin, Warren claims they only needed a “foot trim.” She plans to fight the complaint in order to get her animals back.

For now the animals are being kept with Animal Control and Care. Kootenai Pets for Life will be working with the department in caring for the dogs.

“I am relieved that we were able to come to the aid of these dogs. We have tried to work with the owner to ensure the proper care of the animals, but we reached the point that the animals had to be removed for their well-being.”

The HSUS has provided financial assistance for the care of the animals, and PetSmart Charities™ also provided food, supplies and financial support. To help the HSUS, donations can be made here.