You are here: Home1 / News2 / animal cruelty3 / Horse killed by bow and arrow while grazing in pasture 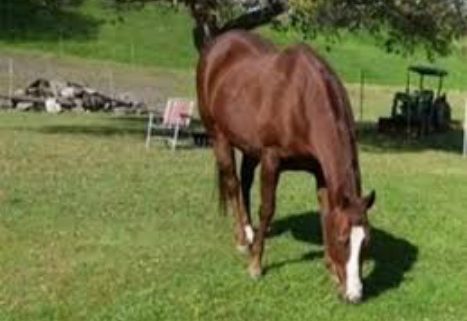 Authorities in Barre, Vermont are searching for the person responsible for killing a family’s 23-year-old Quarter horse with a bow and arrow while she peacefully grazed in the pasture behind her home on Prospect Street. According to the Independent, the horse named Bunny was killed sometime between Tuesday night and early Wednesday morning; an arrow piercing her rib cage causing her to slowly bleed to death.

A part of an arrow was found lying in the pasture; another piece was found in the horse’s stomach. Police Chief Tim Bombardier stated the act was intentional, and even though it is bow hunting season, no hunter would be out at that time of night. In addition, there would be no way Bunny could have been mistaken for a deer considering the horse weighed 1,200 pounds and where she was grazing near her barn.

Bunny’ owner, Regan Howard is devastated over the death of her horse.

“Bunny was a sweet girl,” Howard said. “We bought her 15 years ago. She was my daughter’s and my first horse.  She was a great horse. She’d never be afraid of anybody.”

A reward is being offered and the public is asked to help find the culprit who shot a sweet, friendly horse. The responsible person faces charges of aggravated cruelty to a domestic animal and felony unlawful mischief. Anyone with information is asked to call Barre police at 802-476-6613 or submit a tip online at http://vsp.vermont.gov/tipsubmit.