You are here: Home1 / News2 / Dogs3 / dog abuse4 / Helpless dog found locked in carrier and hidden under a bush
Spread the love
Tweet

In the rural area of Franklin, Kentucky, a tiny dog left to suffer a slow torturous death was discovered on Wednesday; she had been locked in a pet carrier and hidden under a bush near a creek. 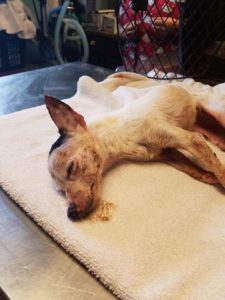 Brought to the Simpson County Animal Shelter, there were few words to express the disturbing situation, however a message was posted on the shelter’s Facebook page – addressing the anonymous, heartless owner:

“I am furious. One of our girls just found this poor dog in a locked carrier by the creek. Did you think it could survive in this heat locked in a carrier? She’s skin and bones and barely alive. The shelter was just down the street. Thank God for the staff at the Fix Foundation. They are attempting to save this little one. Barely breathing, whoever did this, you suck!” Ruth 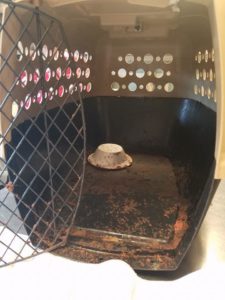 When brought to the Fix Foundation, the severely dehydrated pup – little more than skin and bones was barely responsive. Her skin was scalded from the urine and feces inside of her carrier, her nose was red as she tried desperately to scratch her way out of her tiny prison, her ears red and sore and her feet swollen from the burning urine floating in the bottom of the filthy hell. Dubbed Hope by the rescue group, the defenseless little one was triaged overnight at the clinic and has responded to fluids, however her condition remains critical. 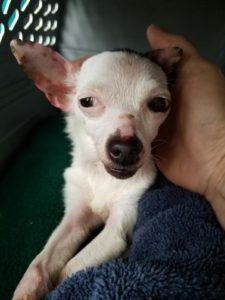 On Thursday afternoon, Hope arrived at Blue Pearl in Louisville and will be evaluated by the veterinarian staff. According to the Arrow Fund, a non profit organization that provides medical treatment to animals who have been the victims of torture or extreme forms of abuse and neglect, where Hope has been transferred, her injuries will be assessed and hopefully this tiny victim of abuse, torture and neglect will have a new chance at life.

To help with her recovery, please click here. (renamed Heaven) Checks can also be mailed to The Arrow Fund, P.O. Box 1127 Prospect, Kentucky 40059.

Corrections officer charged with animal cruelty in death of his K9 companio...