Sometimes truth is stranger than fiction, but Kimberly Pearce, 40, from North Carolina believes a video of her showing her new puppy playing, captured the ghost of her dead  dog Sadie. 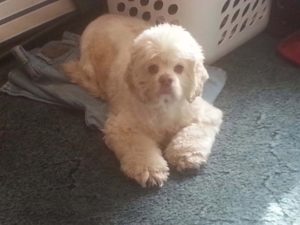 According to The Sun, the strange footage shows what appears to be a dog-shaped transparent figure. Since having made the heart wrenching decision to have her ailing, beloved 13-year-old  Cocker spaniel Sadie, humanely euthanized last week, Kimberly believes the dog returned one week later to comfort her.

“It was only a few days after when I was showing the video to a friend that I saw her appear. I just knew it was her. That was my dog,” Kimberly stated at the apparition running across the room as she filmed her new puppy Bella playing.

“I was in shock. I went outside and started to cry. But then I started to smile. I had been begging for her to give me a sign,” added Kimberly.

And Kimberly was positive the ghostly figure was Sadie – adding she could see the dog’s caramel and white coat plainly. The video had been recorded  at a time of day when there were no cars or anything else around to create any shadows. And although she never believed in ghosts before, Kimberly tells the story of how she tried so hard to communicate with Sadie just days after the dog died. 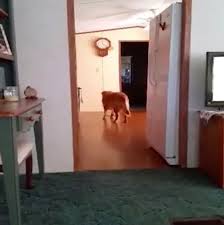 “I felt so guilty because I was the one who made that decision to have her put down… And I just wanted to tell her …’Sadie, I’m so sorry, and please forgive me for what I’ve done.'”

During that conversation she repeatedly asked Sadie to forgive her, and please send her a sign. Kimberly suffers from  depression and anxiety attacks, and her husband bought her a new Morkie puppy named Bella to help ease Kimberly’s pain. Now Kimberly says she feels better because the dog appearing was as if Sadie told her everything was fine. The two used to be inseparable – they slept together, curled up and would often just wrap herself around Kimberly’s neck and head.

Anyone who has ever lost a dog knows the feeling – it’s hard to look around and they just aren’t there for us anymore. For Kimberly however, she just wants to reassure all of us that our beloved pets are here with us, they love us and want all of us to remember them with love and smile.

Dog abandoned for days on Vegas balcony
Scroll to top