On July 23, police in Toronto shot a male coyote who has again been spotted in a Toronto neighborhood very weak and covered in mange, reports the CTVNews. 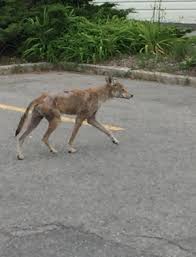 According to the Toronto Wildlife Center (TWC), the animal’s condition continues to deteriorate. Spotted roaming the streets in Scarborough, the coyote’s loss of blood from the gunshot indicates how important it is to capture him. Although the police had issued a public safety alert stating the coyote may have a brain disease, the TWC contends the animal poses no harm to the public – indicating they are extremely shy animals and are frightened of humans. Inside Toronto reports police came out to kill the animal after a resident reported the coyote had been  “chewing his own leg” and looking in “rough shape.

“In our opinion, police discharging firearms in residential areas pose a greater risk to public safety,” stated Nathalie Karvonen, executive director of the humane organization in a recent press release. “Capturing coyotes is very difficult, and the father is still eluding us, but we have captured most of his pups.”

Five coyote pups believed to have been the offspring of the injured male, have been rescued. One pup died within 24 hours of his rescue. All are in poor health and suffering from severe cases of mange. The mother was killed by a car last month. It is believed, despite the male’s injuries and his mange, he continued to care for the pups. 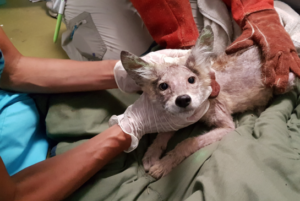 “Some days there has been 24 hour monitoring in the coyotes’ primary area of activity. It continues to be a race against time to capture this family in crisis. We have no idea how long that’s going to take. We’ve been working on a lot of different approaches. Coyotes are notoriously difficult to catch because they are extremely nervous of people and wary of anything strange in their environment like a trap, so we have tried a number of different trapping methods, and there are traps set out there now,” explained Nathalie.

The TWC stated only one person in Toronto has ever been bitten by a coyote, and that person was believed to have been hand-feeding the animal.

The organization hopes to help the male when he is captured. Going forward, the pups who are four months old could be returned to the wild close to the wooded area where they were found. To help this organization with veterinary expenses for this family, please click here.