Update 11/11/16: Jug Head was “tested” with another large breed dog at the shelter and he did fine. The new stipulation is a home with no small dogs.

A handsome dog, estimated to be just two years of age, was adopted from a California animal shelter and then returned by the family that had made a commitment to give him a home…he has since been forgotten. The young dog, dubbed “Jug Head,” has been waiting for someone to notice him at the VVAPL Humane Society in Apple Valley, since September.

According to a volunteer photographer who takes photos of homeless dogs at the facility, Jug Head is a sweet and friendly dog who enjoys playing fetch. He was returned by the family who adopted him because they claim that he did not get along with their dog (though the volunteer has not observed signs of aggression towards other dogs). 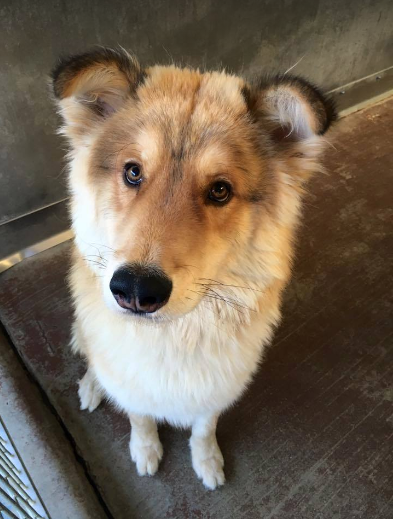 Unfortunately for Jug Head, the shelter staff would like to see this young boy join a home with no other dogs in order to spare him from being returned yet again. Though Jug Head is handsome, young and sweet, the “only dog” scenario is leaving him alone, overlooked and forgotten.

You can help Jug Head find a home by taking a moment to share his information.

Jug Head is located in Kennel B-3