You are here: Home1 / News2 / Dogs3 / dog news4 / Grateful stray pup thanks woman for helping him
Spread the love
Tweet

A video of a stray puppy seemingly in distress being helped by a young Turkish woman has taken over social media with thousands of “awws and oohs.” 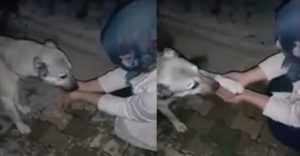 According to the person who posted the video, the good Samaritan spotted the stray pooch and knew she just had to stop and help. It was a very hot day, and the pup was thirsty.  There were no cups or containers anywhere to be found, so the woman found a water supply, cupped her hands and offered her arms out with the water to the timid little dog.

As the video shows, the puppy is scared as he slowly approaches, but the woman’s kind words soothe his fears, and the grateful little guy drinks several handfuls of water.

And when he felt better, perhaps the most touching part of the video is the puppy snuggling up to his rescuer and offering her his paw in thanks.

Who ever said that dogs are a man’s (or woman’s) best friend was just so right. Lend a hand, be kind and be a voice for those who cannot speak. The video has already garnered  more  than half-a-million views, and we can see why.