You are here: Home1 / News2 / Dogs3 / dog news4 / German shepherd howls with the wolves while watching Zootopia on telev...
Spread the love
Tweet

While there may be no way for dogs to connect to their ancestors on links such as Ancestry.com, one particular German shepherd had no intentions of forgetting his roots with the past; or at least as  he viewed them in cartoon form. 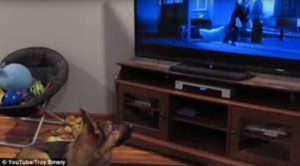 A YouTube viral video uploaded by user Troy Emery introduces us to the curious pooch Randell, who had been lounging doggy style  in front of the television which had been playing the animated cartoon Zootopia. When Randell watched one of  the wolves howling, he looked directly into the camera as if he realized it was now his turn, and for the next 30 seconds, the proud  canine stands up amid his “creature comforts” in the living room of his home, and begins to howl as if he were a denizen of the forest from where his ancestors would bay at the moon. 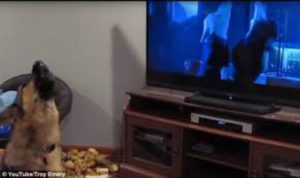 Zootopia is the latest Disney 3D animation movie of an animal metropolis involving an unlikely partnership between a rookie rabbit cop and a wily fox  as they work together solving a conspiracy regarding Manchas, a black jaguar chauffeur, who is captured by wolves.

The video has already garnered  more than 650,000 views. How cute is Randell? Give that boy a scratch behind his ears  and perhaps a belly rub.

(Photos and video by Troy Emery)