You are here: Home1 / News2 / Dogs3 / dog abuse4 / Former owner of German shepherd who bit his leg off to escape trap fails...
Spread the love

The owner of an emaciated German shepherd failed to appear in Wareham County Court in Massachusetts on Thursday for arraignment on animal cruelty charges, reports the Middleborough Wicked Local. 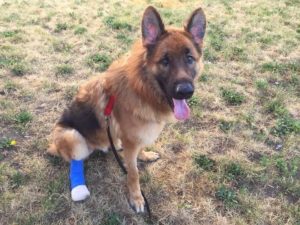 Kevin Kennedy’s dog chewed off his own rear foot to escape from being trapped from a tether twisted around his foot for days or weeks at his home. The long-haired shepherd named Maverick was seized on July 12 by Officer Chelsea Weiand after Middleboro Animal Control in Massachusetts, found the dog and rushed  him to an emergency veterinarian clinic for immediate help. Veterinarians discovered the severe wound to the dog’s right rear foot.

The dog’s other legs were also  covered in rope burns and scars that had healed over in the past. On July 27, Maverick underwent surgery  and has since been adopted. More than 1,000 people wanted to adopt the friendly dog.

Donations for Maverick’s care poured into the Massachusetts Society for Prevention of Cruelty to Animals; remaining funds had been forwarded to “Spike’s Fund” which helps more animals  in need of veterinary care.

Kennedy was charged with one count of felony animal cruelty for neglect and failure to obtain necessary veterinary care. If found guilty, he faces up to seven years in prison and/or a maximum fine of $5,000. A default warrant was issued and police are now searching for him. (Photo: MSPCA)