According to CbsNews, David Van Buren has had his pet alligator since he was nine years old. Gwendolyn even went to college with David. But now things have changed after a recent complaint, and Florida Fish and Wildlife officials told him that 13-foot Gwendolyn has grown too big to keep on his property in his backyard. 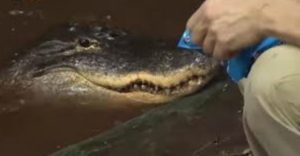 Gwendolyn’s favorite treats are pizza and chocolate chip cookies, but officials from FFW contend  the alligator is not safely enclosed in Van Buren’s backyard.

In 1994, Gwendolyn gained notoriety when she was barely a 7 1/2-foot, 107-pound alligator. A Dade County judge decided in the male gator’s favor. Judge Loree Schwartz Feiler ruled the gator could stay with David, but only if adequate housing was provided. After an inspection, the judge allowed the gator to go home. The gator, purchased as a baby had been a pet. He sunbathes in his private pool surrounded by an eight-foot-high fence topped with barbed wire, “to keep human animals out,” David described after Gwendolyn came home. As to why a male gator has a girl’s name, for the first 20 years, his owners though he was a she!

Fish and wildlife officials have stated however that the man and his gator have been together for so long, the domestic home is actually what’s best for Gwendolyn. If the retired firefighter makes some needed changes to his property to accommodate Gwendolyn’s larger size, his beloved reptile can stay.