You are here: Home1 / News2 / Dogs3 / dog abuse4 / Family’s Jack Russell paralyzed after he was ‘shocked’...
Spread the love
Tweet

In Dalton, Georgia, a 67-year-old woman is trying very hard to cope with the death of her 20-pound Jack Russell terrier after a utility worker allegedly “shocked” the dog through the family’s fence while reading a utility meter, reports WrcbTvNews. 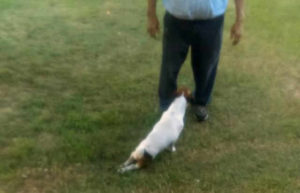 Pascual Nieto told authorities their ten-year-old dog named Osito had been struck with an electrical prong because he had been barking inside of the fence. In fact, the family had purposely built the fence so workers would not have to come in contact with the dog – the meter was not enclosed in the dog’s fenced area. And when two workers from the Dalton Utilities company had been at the Nieto home, the family claims the worker shocked the dog through the fence.

“My mom saw the boy when he did it. She hollered, ‘what did you do to my dog’? The boy just looked and said, ‘he’s barking,'” stated Pascual.

Osito was left paralyzed and when brought to the family veterinarian, there were no guarantees their dog would ever walk again; the family was not able to afford the thousands of dollars an operation would have cost. Osito remained paralyzed from the middle of his back. Sadly the decision was made to humanely euthanize the defenseless pooch.

And now Pascual’s mother, who spends much of her time alone, continues to grieve for her dog. And even though Osito was a little dog, he provided a lot of companionship and would always bark if someone came to the house.

“They need to do something. Because if you do nothing, they could start doing it to other dogs. They need to make an example for other people too,” stated Pascual.

The Whitfield County Sheriff’s Office is investigating the situation as an animal cruelty case. According to Dalton Utilities, the company is also investigating and has identified the two workers who had been at the Nieto home. A spokesperson for the company stated crews are not supplied with the kind of shock equipment described in the report.

70 dogs and cats removed from ‘horrific’ conditions at Toledo rescue... Young police canine has passed away
Scroll to top