You are here: Home1 / News2 / Dogs3 / Family searches for dog who belonged to man killed in crash 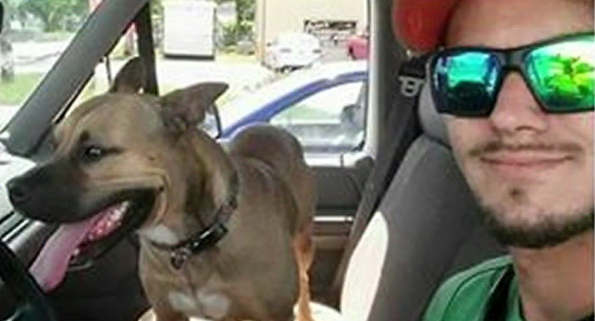 The family of a man who was killed in a devastating motorcycle crash in Mayport, Florida, is searching for his dog. According to Thursday’s News 4 Jax, “Bubby,” a Rhodesian Ridgeback mix, belonged to 24-year-old Kasey Whilden, and his girlfriend, Jennifer Reed, 42 – both died on October 20 when a van struck their motorcycle.

After the fatality, Bubby went to live with Reed’s family – but he did not get to stay for long. According to Whilden’s mother, the family gave the dog away just one day after taking him home. Whilden’s mom, Rita Rodriguez, told News 4 Jax, “They could have left him in my son’s apartment until we got down there. I was down there less than 48 hours after it happened.”

But Reed’s family claims that they did not know how to reach Whilden’s family after the crash, and that the dog was “too disruptive” to their household, which was in mourning. A family member told News 4 Jax, “We just had too much going on here. The dog was barking, running in and out of the house, bringing dirt in the house.”

The family took Bubby to a local animal shelter but someone in the line offered to take the dog home. The animal shelter is trying to help Rodriguez find whoever left with Bubby, but so far, there are no leads.

Anyone with information about the dog’s whereabouts is asked to email Whilden’s mother at ssria12@gmail.com.