A family in Denison, Texas, is mourning the untimely death of their pet deer, who was shot on their property late last week. According to KXII News, Sue Eperjesi’s five-year-old fallow deer, “Beav,” was gunned down by someone last Friday. 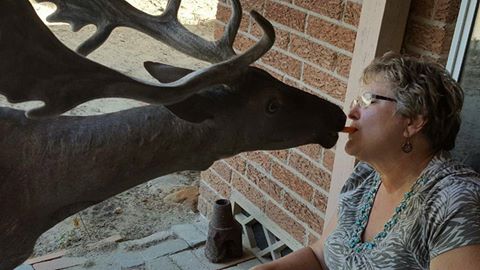 The friendly deer was standing near the property fence-line, Eperjesi told KXII, “Beav was probably standing there watching them, thinking they were going to give him a snack or talk to him. Instead they just shot him and left.” On November 18, Erik Burns, a friend of the family, made a Facebook post about the sad situation:

Texoma peeps. A friend of mine needs your help to catch a poacher. Sometime early this morning somebody drove up to Roy Eperjesi and Joseph David Eperjesi high fence property along 131 in Denison and shot his fallow deer from road and drove off. He found the deer dead this morning shot in the neck next to the fence.

The local game warden has been alerted, and Beav’s family has learned that other pets in the area were shot on the same day. Anyone with information about this crime is asked to call the local authorities.