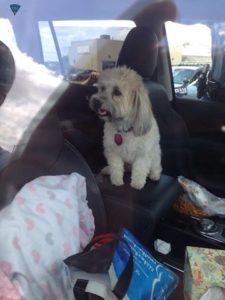 A family, who recently moved from California to Massachusetts, went to the beach this week and left their small dog locked inside of a parked vehicle. Concerned passersby noticed the dog inside of the black SUV, which was parked at Nantasket Beach on Thursday, and they proceeded to locate a state trooper who was in the area to ask for assistance.

The Massachusetts State Police commented on the dangerous situation that the dog had been placed in by the owners:

Today at Hull Beach, this poor pooch was left in a car as the high hit 84 degrees. Although the owner had left the windows cracked, the dog had no water in the vehicle. Trooper McLaughlin was patrolling Nantasket Beach and a group of people advised him of the dogs plight.

Two officers, ACO Badger and Hull PD Officer Fahey, responded to the scene and it was determined that the dog was sitting a vehicle which registered 115-degrees inside. With the help of a tow truck driver, the vehicle was opened and the dog was freed from the heat.

Reminder to all: On a sunny day, even with the windows cracked, your car will heat up rapidly. Do not leave your beloved pets in the sweltering heat. It could be catastrophic.

The dog’s owners returned to the vehicle after their dog was out – they told the authorities that they had recently moved to the area and didn’t realize that dogs are not permitted on the beach, reported Fox 25 Boston. Their decision to continue on their way to the beach, leaving the dog locked in the car, has resulted a criminal summons for Animal Cruelty. 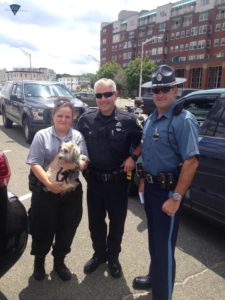