In a disturbing case of animal cruelty, the Humane Educational Society has confirmed they are investigating the stabbing of a family’s dog in Chattanooga allegedly committed by a ten-year-old child, reports NewsChannel9. 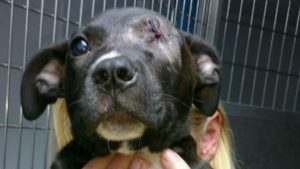 On Thursday, a call came into the Hamilton County Sheriff’s Office concerning a small terrier that had been stabbed repeatedly in the face with a pocket knife. The investigation began when the dog named Mika, her face covered in blood, ran into a neighbor’s yard. The neighbor called authorities.

Bob Citrullo, the Humane Educational Society’s director, was contacted. The dog had been stabbed twice in the eye with a pocket knife.  She was immediately transferred to the the Regional Institute for Veterinary Emergencies and Referrals; one of her eyes could not be saved and had to be removed. She was also reported to have been covered in ticks, and her stomach contained gravel.

As to the child, according to WsmvNews,  someone close to the family referred to the 10-year-old child as a “punk” who has “anger issues.” Authorities are pursuing animal cruelty charges.

Mika is expected to recover and is in the care of the HES.