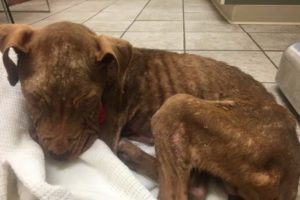 A puppy left suffering in the heat in Paterson, New Jersey, was so emaciated that his pitiful condition caught the attention of his owner’s neighbors. According to Wednesday’s ABC 7 News, animal control who responded to the animal welfare check discovered a pup who was so weak that he collapsed from the exertion of greeting a visitor.

The Ramapo-Bergen Animal Refuge share details of the rescue effort on a fundraiser created for the puppy, “A skeleton of a puppy wagged his emaciated body as they approached. He then collapsed from the exertion and excitement of greeting a visitor, having been alone for days. The officer took him off his chain and brought him into the home, where he staggered over to the toilet and drank all the water out of it before she could stop him.”

The owners admitted that he hadn’t eaten in days. RBARI rescuers raced to meet animal control and get the puppy immediate medical care. The puppy’s tail never stopped wagging – he was so excited to finally have human contact and kind touch. The rescuers took him into their arms in a big fluffy towel because he was so frail.

The frail pup, suffering from skin infections resulting from being kept in urine and feces, was taken to the Oradell Animal Hospital for antibiotics and I.V. fluids – despite his pitiful condition, rescuers noted that his little tail never stopped wagging.