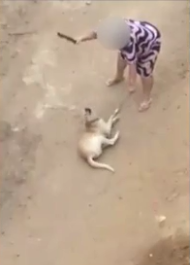 A shockingly disturbing video, of an elderly woman beating a dog, has raised the ire and concern of animal advocates across the world. According to Thursday’s publication of Espirito Santo, a 70-year-old woman seriously injured the dog who can be seen on the video crying and writhing in pain.

The incident took place on Thursday in the Boa Vista neighborhood in Itapemirim, Brasil. The shocking abuse, captured on video by one of the woman’s neighbors, took place because the woman, whose name has not been released, claimed that the dog had bitten her son. According to Extra Globo, the elderly woman was arrested and the wounded dog was taken to an animal care center and provided with veterinary treatment for injuries to the head and legs. 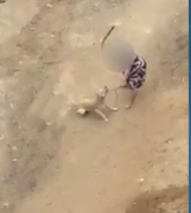 Thanks to an outpouring of support on social media, offers to adopt the abused dog have been received. Click here to view the video captured of the abuse – warning, graphic and difficult to watch.