In a heartbreaking case of an apparent act of despicable animal cruelty, an elderly woman’s friendly Staffordshire terrier suffocated to death on Tuesday after an attacker wrapped the dog’s head in duct tape, reports TheAgeAu. 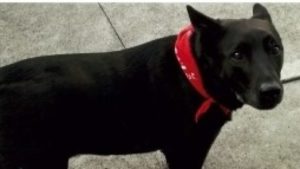 The nine-year-old dog named Toby lived in Cragieburn, a suburb of Melbourne, Australia, and was found dead in the homeowner’s backyard. According to Victoria Police, a would be robber entered the privately fenced off property and in a random act of cruelty wrapped duct tape completely around Toby’s head, face, mouth and nose. His owner, a 71-year-old widow, who adopted Toby five years ago as a companion is devastated.

Prior to the attack on Toby, there had never been any reports of neighbors not liking the friendly and laid back dog. It is feared Toby’s gentleness and love for everyone helped the abuser apply the tape to keep him from breathing. Detectives continue to investigate the horrific case of animal cruelty. Anyone with information is asked to contact Crime Stoppers at 1.800.333.000.