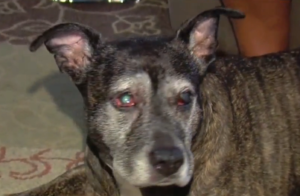 An elderly dog was badly injured when someone broke into her owner’s house in Hamtramck, Michigan, last Friday. According to Monday’s WXYZ News, “Abbey,” a 14-year-old pit bull was apparently doused in Drano and struck with a broom by whoever broke into Sarah Birkel’s house.

Birkel rushed the injured dog to an emergency veterinary hospital for care – according to a GoFundMe account which was created for Abbey, the expenses for Abbey’s care are steadily climbing. The caustic chemical burned Abbey’s eyes and she is also being monitored for internal injuries. 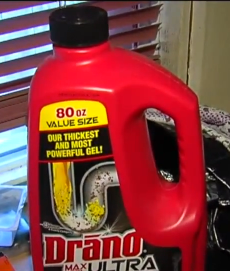 An area rescue organization is hoping to find out who is being the cruel incident which injured Abbey. On Monday, Detroit Dog Rescue reached out to its Facebook followers with a plea for help, “We’re begging, anyone with information please come forward. Detroit Dog Rescue is offering a $1,000 reward to anyone with information leading to the arrest of the person who assaulted this dog.”

Anyone who has information about the break in, and animal cruelty, is asked to reach out to the Hamtramck Police Department at 313-876-7800. Find the fundraiser information at this link.