A tiny four-month-old puppy nearly dead, rescued on the 4th of July, is  showing marked improvement. According to Janine  Guido, from Speranza Animal Rescue, the puppy named Libre had a banner Monday morning. On the organization’s Facebook page came the following update: 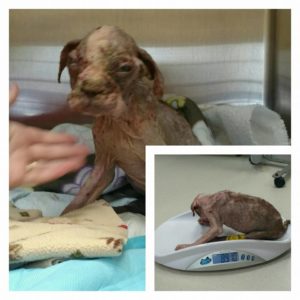 “Just visited our little man, Libre.
WOW! I am in awe of his improvement.

When he heard my voice he actually was able to lift his head! And he looked around with his eyes. I can’t get over how alert he is.

His WBC (white blood count signifying infection) has went down significantly since Sat. Which is AMAZING! he also has gained almost a total of 2 pounds in the past week.

Keep it up sweet boy! We are so proud of you!!”

Of course, Libre is far from out of the woods yet. According to the Dillsburg Veterinary Center, the puppy who was emaciated, dehydrated and barely breathing was diagnosed with demodectic mange, severe secondary infections, oozing open wounds and maggots. He continues to be treated daily with medicated baths and scrapings and remains on IV medical and antibiotic fluids. Libre’s right eye still suffers from severe ulcers, and it is unknown at this time if he will lose that eye.

The Lancaster County SPCA, director Susan Martin, continues to defend her decision not to charge the breeder with animal cruelty. On Friday, Martin stated it was impossible to prove “beyond a reasonable doubt that the individual willingly and knowingly grossly neglected care for the animal intending to cause foreseeable grave injury or harm.”

According to the Lancaster Online, however, Dextin Orme, a produce delivery man who originally contacted rescue volunteers about the puppy’s condition, stated,

“I noticed him about two months ago — he looked like he had a skin condition then. I’m a dog lover, so I check up on the dogs. On July 1, I approached the cages (and) saw what appeared to be a dead puppy.”

“The puppy opened his eyes but couldn’t move.He was in horrible condition,” stated Orme.

Orme said he contacted the SPCA prior to the 4th of July weekend and nothing was accomplished as to helping the puppy. After the puppy was rescued by Janine, the SPCA’s Friday statement included information that the breeder had been treating the puppy, but in the last hours before Libre’s rescue, according to the SPCA, the puppy’s condition greatly deteriorated.

“That’s definitely not true,” Orme replied. “I was there four days before I took him out, and he was bad. He was suffering for a long time. He was left there to die.”

A short time after Libre was rescued, the mother dog was surrendered to the SPCA by the breeder; the dog being described as just starting to show signs of a skin infection. According to the SPCA, the dog will be treated and when she has recovered, will be available for adoption.

And so the question remains, why no charges were ever filed against the puppy mill breeder? Everyone continues to see the condition of Libre; that didn’t happen overnight. Libre has no muscle tone and is not able to even walk yet. All eyes, hearts and wishes are with the puppy’s recovery whose prognosis is still unknown. Doesn’t Libre deserve some justice?