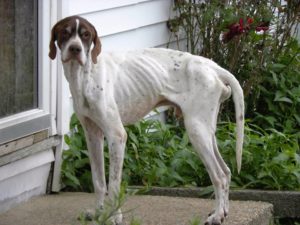 A nine-year-old German Shorthair pointer, who was found near death at a home in Maple Shade, New Jersey, last month, has passed away. The dog, dubbed “Dino,” was taken to the Marlton Animal Hospital on June 17 after an animal welfare check at his owner’s home revealed that he was in dire condition.

According to NJ 1015, Dino was in “critical” condition from the moment that he arrived to the veterinary hospital; Animal Lifeline, an area non-profit organization, stepped up to take on the emaciated dog’s veterinary expenses.

Despite extensive efforts by the veterinary staff, Dino’s condition did not improve. On Thursday, the Burlington County SPCA Humane Police updated Facebook followers who had been monitoring the sad situation.

On Monday, a Doctor at the hospital called the officer that filed charges against the owner and told him that he might want to come over to see Dino. When the officer arrived he found a very somber staff as the final medical tests had come back and there was nothing to do that would save him.

The Burlington County SPCA Humane Police noted that Dino’s original owner (who is not the individual facing animal cruelty charges) found out about the tragic situation via social media and she was able to see Dino before he died. The SPCA Humane Police wrote, “While visiting Dino, the officer was introduced to Dino’s original owner who found out about her dog’s condition on social media. She was devastated. Dino recognized her despite not seeing her for 5 years. He was able to muster enough strength to kiss her. She was the only person he kissed during his 4 week stay at the hospital.”

We want to thank the Marlton Animal Hospital, Doctors and staff for their heroic efforts and the Animal Lifeline Rescue that funded the effort to save Dino after he was surrendered. Their assistance in the investigation was crucial to the case.
Dino still has a voice that will be heard one more time.

14-year-old Skipper loved by her family, but tossed away when they moved Magnificent German shepherd: What is she doing in a shelter?
Scroll to top