You are here: Home1 / News2 / Dogs3 / dog abuse4 / Dubbed laziest dog owner drags his 2 dogs for a walk from his SUV
Spread the love

In Sandhurst, Gloucester,  United Kingdom, a man dubbed the laziest dog owner, has drawn the ire of the community and the RSPCA after he was spotted dragging two dogs on either side of his vehicle as he drove, reports the SunUK. 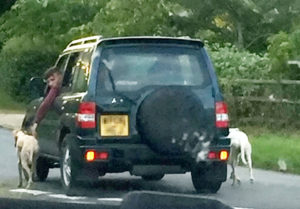 Motorists were disgusted as the man drove on the main road with the dogs tethered through the vehicle windows as traffic backed up behind him and the dogs walked quickly to keep up. Even more disgusting stated witnesses. were the two children in the vehicle who may have been holding the leashes. According to Radio XNews, an angry witness stated:

“The driver dragged the dogs for miles, and there was a queue of cars behind him. I asked my wife to take the pictures after I saw the two dogs getting squashed by a car coming from the opposite side of the road.”

The RSPCA has condemned the act stating the owner should be charged with animal cruelty because the dogs were placed in a very dangerous and hazardous situation.

“An accident could so easily happen not only to the dogs, but also could be a danger to other road users,” stated the organization.